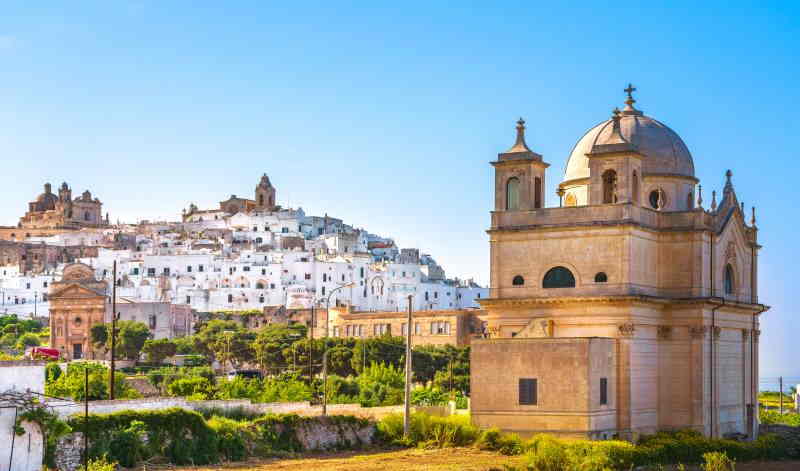 Known as the ‘White City’, Ostuni is one of the gems of Puglia. A quaint medieval town surrounded by ancient olive trees and with spectacular views over the Adriatic Sea, a day trip to Ostuni is definitely a must when visiting Puglia and an experience you’ll never forget.

WHAT TO SEE AND VISIT IN OSTUNI 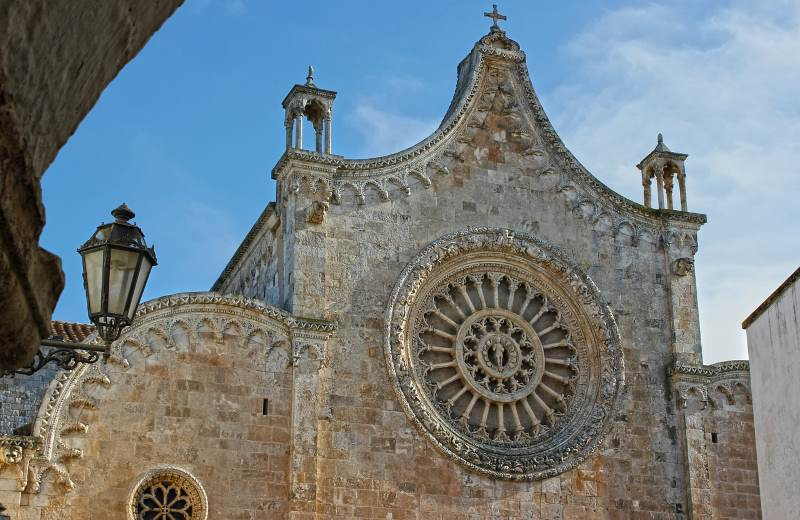 The stunning Cathedral of the Assumption of the Virgin Mary sits atop Ostuni’s highest point, where you can enjoy wonderful views over the whole town. The cathedral itself dates back to the 15th century during the Aragonese era and is built in the late Gothic Venetian style using Ostunese limestone. With one of the most beautiful facades in the Puglia region, it features a magnificent rose window composed of 24 intricately carved beams, figures of the 12 apostles, and 12 arches embellished with floral motifs. The interior of the cathedral will impress you with its artwork-covered ceiling and altar. 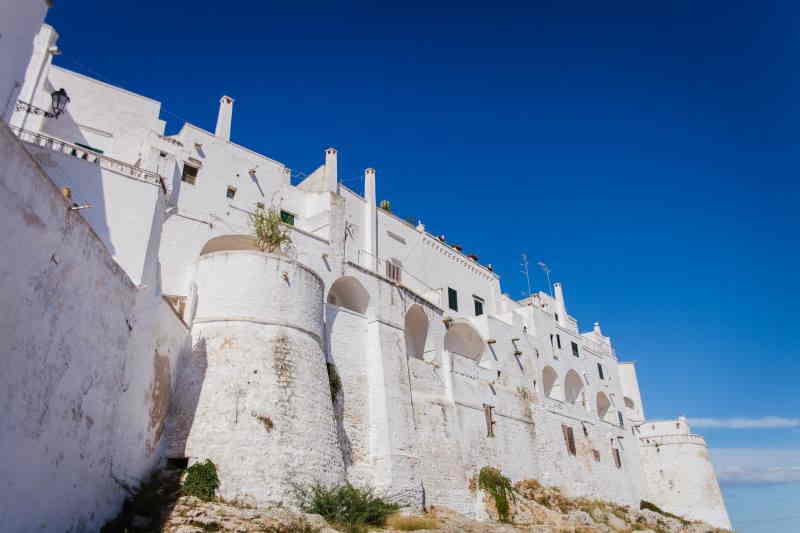 Ostuni’s city walls will transport you on a journey of the town’s history. Over the years, the city walls have been built and changed by the Messapians, the Byzantines, the Normans, and the Aragonese to name a few. Originally built as a fortress to defend the town from invading forces, now the shining white of the walls contrasts wonderfully with the green of the olive trees and the crystal clear blue of the Adriatic Sea, creating a beautiful sight for you.

Piazza della Libertá is the heart of the historic centre of Ostuni and filled with interesting monuments. The pyramidal obelisk of St Oronzo, the main protector of the town, stands at over 20 metres high with a figure of the saint at the top looking over the square. Dominating the piazza is the Palazzo Municipale, originally an ancient Franciscan monastery built in the Gothic style. In the 19th century the facade was reworked in the Neoclassical style and the building was converted into the town hall. Next to the town hall is the Church of St Francis, originally part of the monastery and reconstructed in the 19th century to harmonise with the ‘new’ town hall. The piazza also has plenty of cafes, bars, restaurants, and gelateria where you can relax and soak up the lively atmosphere of the square. 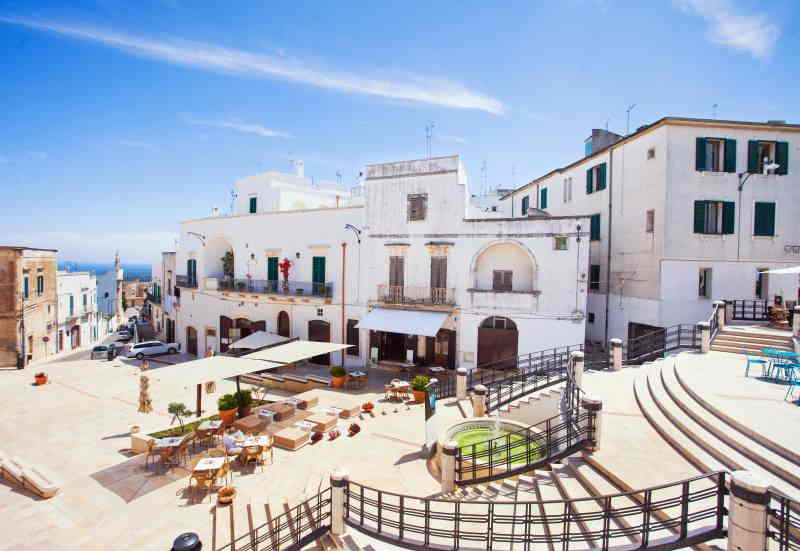 Ostuni was built according to no plan – and this is now evident in the town that we see today. Ostuni’s old town is a maze of alleyways, arches and stairways intended to confuse invading forces, but now create a charming experience of getting lost among its white, winding streets; down one street you may find a dead end, but down another you’ll be rewarded with delightful views of the sea. Its whitewashed walls also have their own story. In the 17th century the plague hit the town and infected houses were painted white using a limestone dust and water mix. When the locals realised that instances of the plague were fewer when they did this (probably due to the antibacterial effect of the calcium carbonate), they rejoiced at the miracle and have since kept up the tradition.

Located in the Church of Monacelle close to the cathedral, the archaeological museum in Ostuni displays something very special – the oldest woman in the world. The skeleton of Delia, a 26,000-year-old pregnant Palaeolithic woman, was discovered in a grotto just outside Ostuni, and here you can see a reconstruction of the site where she was found and her burial place. The museum also houses a number of discoveries found in the area, from the 5th century BC up to the 16th century.

What to do in Ostuni 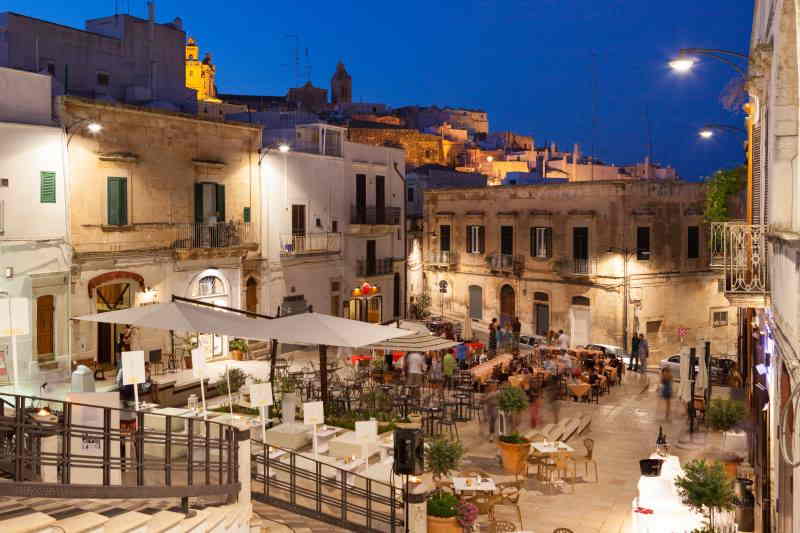 Ostuni doesn’t just have historical sights to see, there’s also plenty to do here. If you’re interested in Italian gastronomy, you’ll love a visit to a producer of one of Puglia’s most common products – extra virgin olive oil, or ‘green gold’, as it’s locally known. Puglia has many olive groves and olive oil farms and you can learn about how this wonderful product is made and, of course, taste it for yourself. There are also some very ancient olive oil mills, some of which date back to the Middle Ages and even as far back as the Pre-Roman age that you may be interested in visiting; just let us know and we can arrange it for you.

If you want to get out into the Puglian countryside, you can also book a walking or cycling tour with us to discover the appealing rural life of the region. Hiking in the Murgia National Park gives you an insight into the agro-pastoral development of the area. If you join us on a bike tour, you’ll follow the old route of the Ancient Roman Via Traiana and pass corn field and orchards of almonds and figs. Depending on the season, you may even get the chance to sample these figs and almonds – directly from the tree!

After spending a day sightseeing and getting active in the countryside, it’s time to relax and enjoy what else Ostuni has to offer. If you need a little retail therapy, Ostuni’s main street is filled with independent boutiques and souvenir shops selling everything from olive oil to traditional clothing. When the sun goes down, Ostuni has plenty of restaurants and bars for you to enjoy. If you need any recommendations, just let us know and we’ll tell you the best places to eat, drink and shop.

As you can see, Ostuni is a wonderful place to visit. It’s also the ideal place to base yourself when travelling in Puglia. As well as being a vibrant town with lots to see and do, and plenty of great places to eat, drink and shop, Ostuni is centrally located with all the other great places to visit in Puglia an easy drive away.

Ostuni is home to some of the most stylish and unique bars of the region. If you’re in town for a few days, you’ll be surprised and amazed by their quality. When taking part in one of our guided tours, don’t hesitate to ask your tour guide for recommendations so you get the best insider tips on where to drink and for the best gelato in town!

Places to stay in Ostuni

Ostuni offers a variety of accommodation opportunities. In the heart of the town you can find a very exclusive and classy 5* hotel located right behind the cathedral in the old castle of Ostuni. In the historic centre and just a few walking minutes away from the cathedral are a number of 4* hotels, most of them of very good quality. If you’re not that into hotels and would prefer to stay in a B&B or a holiday home, you have plenty of choice. They are mostly located in the city centre and are very unique due to the local interiors made of out local limestone. If you’re lucky, you might also find a holiday home with a roof terrace and a beautiful sea view!