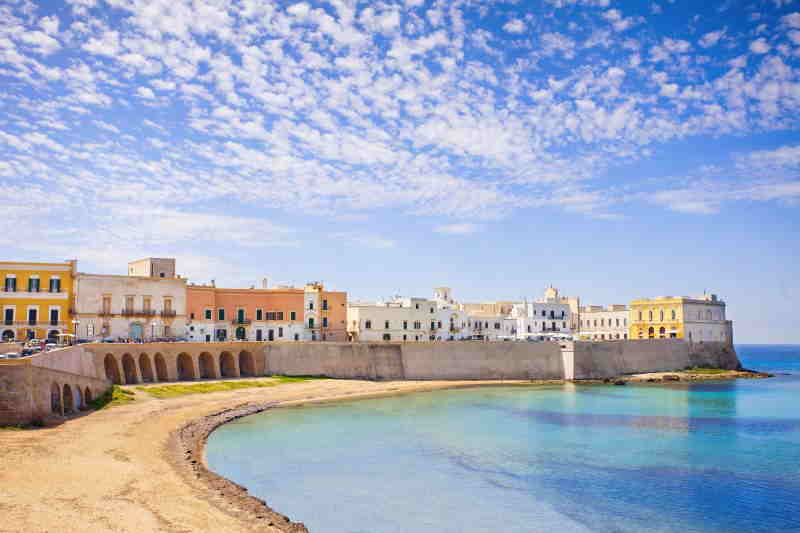 With its long stretches of sandy beaches and crystal clear waters of the Ionian coast, it’s no wonder that Gallipoli is so popular as a tourist destination. Although the city has some of the most beautiful beaches in Italy and these alone are reason enough to visit, the ‘cittá bella’ is actually so much more than the sea and relaxing by the beach. With its old island town, Greek influence, fascinating cathedral, and medieval castle, Gallipoli will astound you with its stunning beauty. A visit to Gallipoli is a must when in southern Puglia.

An enchanting coastal town rich in history, Gallipoli is a wonderful mix of Greek roots and Baroque and Renaissance architecture. On our Gallipoli tours you will walk through the alleyways of the old town, linked to the mainland by a 16th century bridge. You will be astonished by the courtyards and palazzi of what was once, back in the 17th century, one of the richest cities in southern Italy.

With over 80 canvases, the magnificent Cathedral of St Agatha is considered one of the most beautiful cathedrals in the whole of the Salento Peninsula. Gallipoli is also known for its traditional underground olive oil mills which are definitely worth a visit.

VISIT GALLIPOLI - WHAT TO SEE AND DO 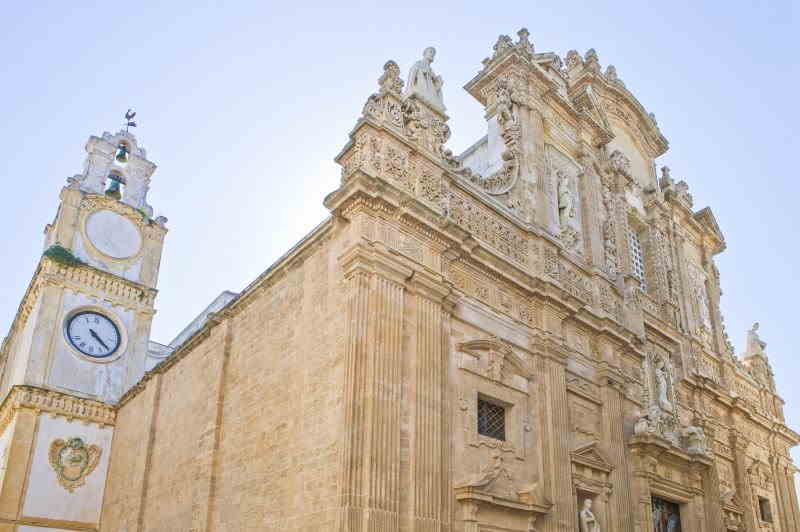 Like most Puglian cathedrals, the Cathedral of St Agatha was originally built in the Puglian Romanesque style during the Norman Age in the 11th century. Six centuries later, the cathedral was restored and renovated in the typical Baroque style. There are many masterpieces and canvases housed in the church which you will be impressed by, including some by local artist Giovanni Andrea Coppola.

The interior is in a Latin cross plan with two magnificent Baroque altars dedicated to the main saints and protectors of the town: St Agatha and St Sebastian. The main facade is also extremely impressive; richly decorated in carparo, a local limestone, with statues of saints placed in small niches, the facade was made by another famous Puglian artist, Zimbalo.

For many years, Gallipoli played a fundamental role in the production and exportation of lamp oil in Puglia. This was an incredibly important resource of the land until the first half of the 19th century; the lamp oil was used as fuel for lights in many cities across northern Europe. However, the invention of petrol in 1850 drastically changed the industry.

With lamp oil then being an obsolete product, the local production turned its sight to olive oil for the gastronomic industry. As olive oil was not as profitable as lamp oil, after several decades of economic growth, the town experienced a downturn. When on one of our Gallipoli tours, do not miss the chance to visit the old underground olive oil mills from the 16th century, one of the most interesting sights in the town. 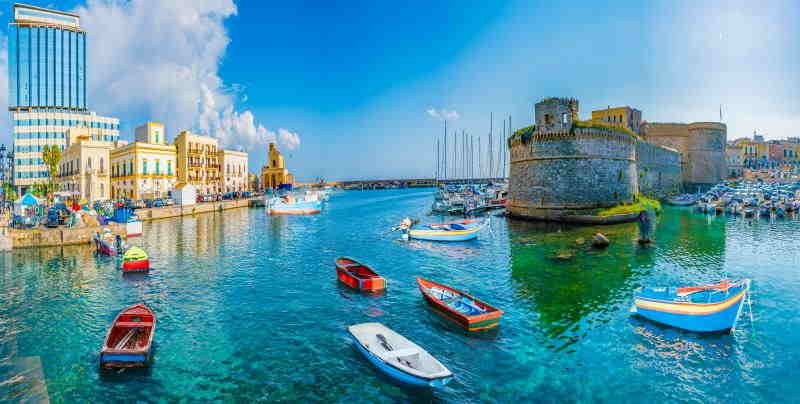 Because of its strategic position by the sea and its island location, Gallipoli has always been extremely difficult to besiege and occupy by enemies. This is the reason why the city remained under Byzantine rule for such a long time, until the Norman Age in the 11th century, unlike the rest of Puglia, which was partly taken over by other populations during the time of the Byzantines.

The fortress on the old island city was first built under the Byzantines and the Normans in the 11th century. In the 13th and 14th centuries, the castle was heavily restored and extended by the Angevines and the Aragonese, including the addition of a wall with a polygonal plan, fortified with cylindrical towers at the corners, and a lookout tower.

Nowadays, this fascinating castle overlooking the sea is open to visitors and is a popular tourist attraction. Numerous temporary exhibitions and cultural events are also held in the castle throughout the year, and during the summer the fifth tower is converted into a cinema.

Located just a short walk away from the castle is the Greek Fountain, thought to be the oldest fountain in Italy. Originally it was thought to have dated back to the third century BC, although more recently it has been said that it was more likely built during the Renaissance period; however, its exact date of origin still hasn’t been ascertained. Its facade will astound you with its amazing bas-reliefs, which depict the mythological metamorphosis of Dirce, Salmacis, and Byblis.

The harbour and city walls 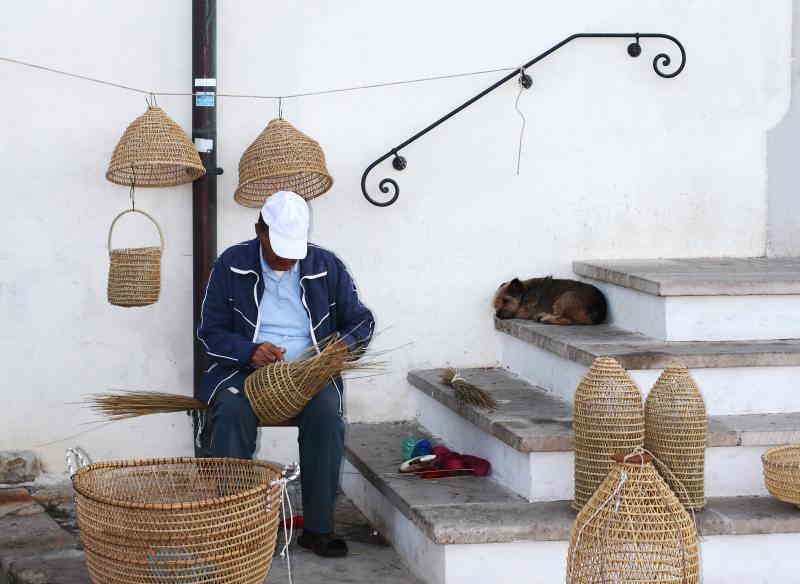 Being an island, the old city of Gallipoli offers beautiful views over the Ionian Sea. The town is an old fishermen’s village, and this heritage is still evident when you stroll around the town; everywhere you go, you will still see fishermen, and there is also a fish market. While on one of our Gallipoli tours you should take a walk along the city walls, originally built in the 14th century and then restored by the Spaniards in the 16th century, and enjoy the splendid views.

Also located within the old town, just below the city walls, is the beautiful beach Spiaggia della Puritá. If you’re into seafood, every morning there is a seafood market which is well worth a visit; it’s highly recommended that you try some raw seafood coupled with a glass of white wine.

A stunning palace once belonging to the Pirelli family from the 16th century, the highlight of the Palazzo Pirelli is its fascinating vaulted ceiling of the entrance to the building. Festooned with exquisite decorations on a mythological theme, including a depiction of the goddess Minerva. Having stayed in the Pirelli family until the 18th century, it was then converted into a pharmacy.

The beaches around Gallipoli are some of the most beautiful in Italy, and you certainly should visit at least one on your private Gallipoli tour. South of Gallipoli you will find Baia Verde, Punta Pizzo and Punta della Suina. If you travel towards Porto Cesareo, you will find Punta Prosciutto and Torre Lapillo.

The Celebrations of St Agatha.

We highly recommend visiting one of the best Negroamaro and Primitivo vineyards in the area to try some of these exquisite wines.

The Church of Santa Caterina d’Alessandria in Galatina is well worth a visit.