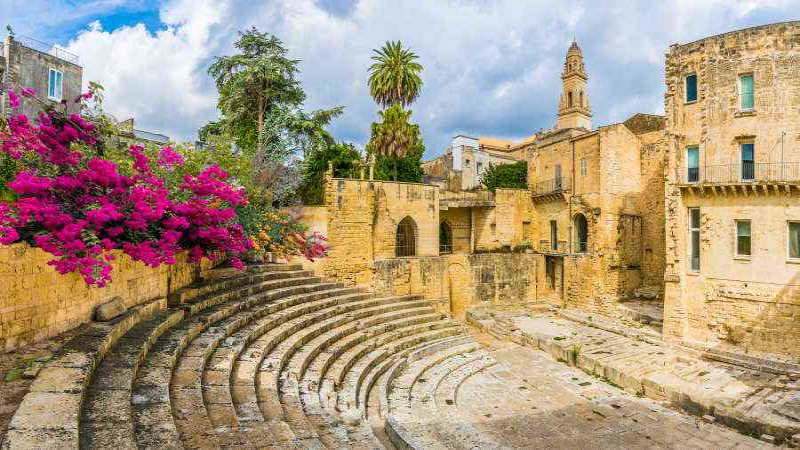 Known as ‘the Florence of the South’, Lecce has been captivating visitors for years. A magnificent Baroque town, opulent architecture, a long history, and wonderful food all await you on a trip to Lecce!

Lecce could be described as the very heart of the Puglian Baroque style, with its stunning Baroque palaces and churches constructed from the warmly-coloured Lecce stone.

On your private guided tour, you will get the chance to explore these elegant buildings which surround the magnificent ruins of what was once the Roman city of Lupiae. Your tour guide will show you the Cathedral of Saint Mary of the Assumption as well as the beautiful church of Sant’Irene, the second patron saint of the city.

You will also explore the main square, which is dedicated to the main patron saint, Saint Oronzo, and the Basilica of Santa Croce, all of which give testimony to the glorious era and wealth of the city and the whole province. Situated just below the main square we will then discover a restored 2nd-century Roman amphitheatre, only uncovered around 100 years ago.

LECCE WHAT TO SEE AND DO 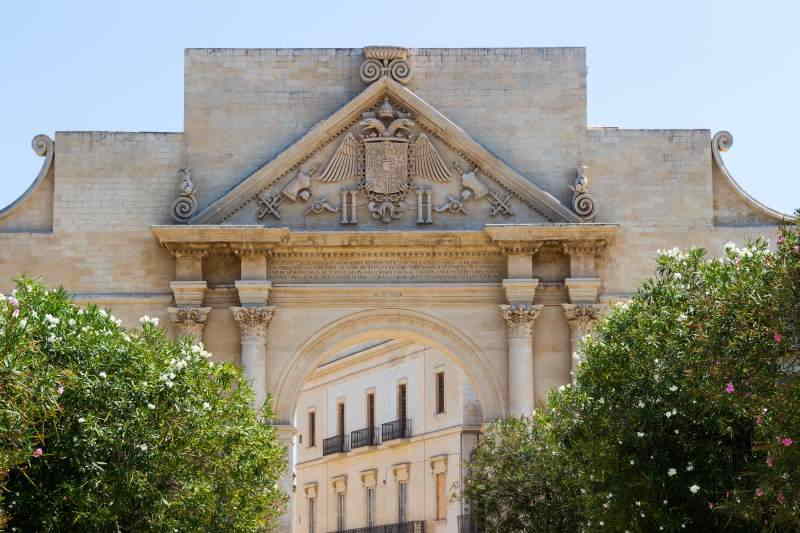 A stunning triumphal arch constructed by Giacomo dell’Acaja in 1548, the Porta Napoli was built as the main city gate. It was dedicated to Charles V, who was supposed to visit the city but eventually never did. Built with the typical ‘pietra leccese’ stone, this monumental arch faces the direction of Naples and consists of two majestic Corinthian-style columns with a triangular pediment embossed with the symbol of the Emperor.

Positioned in front of the Porta Napoli is a 14th-century obelisk, built to honour Ferdinand I, King of the Two Sicilies. At the base of the obelisk you will see a dolphin biting a half moon, the symbol of the local population’s resistance against the Ottomans during the 16th century.

Lecce is known for being an important centre for the arts and culture, so it won’t come as any surprise that it is home to one of the most famous and beautiful theatres in Puglia. Named after the famous composer and musician Giovanni Paisiello, who came from the neighbouring city of Taranto, the theatre is situated in the historic centre of Lecce.

Mostly built in the 18th century, you will be amazed by its Neoclassical facade. If you are planning on spending a few days in Lecce as part of your trip, we highly recommend attending one of the many cultural events that are staged here. 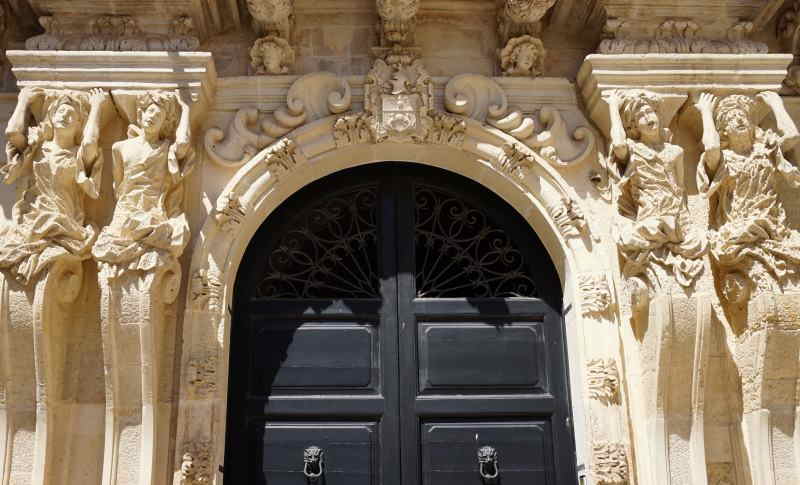 Here in Puglia we have a popular saying: ‘when in Lecce, always look up to the sky’. And it’s true; by doing this, you won’t miss the exquisite grandeur of the embellishments of the balconies. The Baroque-style palazzi in Lecce are intricately decorated and distinctive to the city. The Palazzo Marrese is one of the finest and most elegant of all the balconies here.

Located in Piazzetta Falconieri, this beautiful palazzo – along with the majority of the Baroque-style palazzi in the city –dates back to the 18th century, with a facade in the Rococo style. On this tour we will admire this wonderful balcony and the elegant main portal with its four caryatids which have both a practical and symbolic use; they simultaneously hold the family’s symbol whilst also holding up the frame of the balcony. 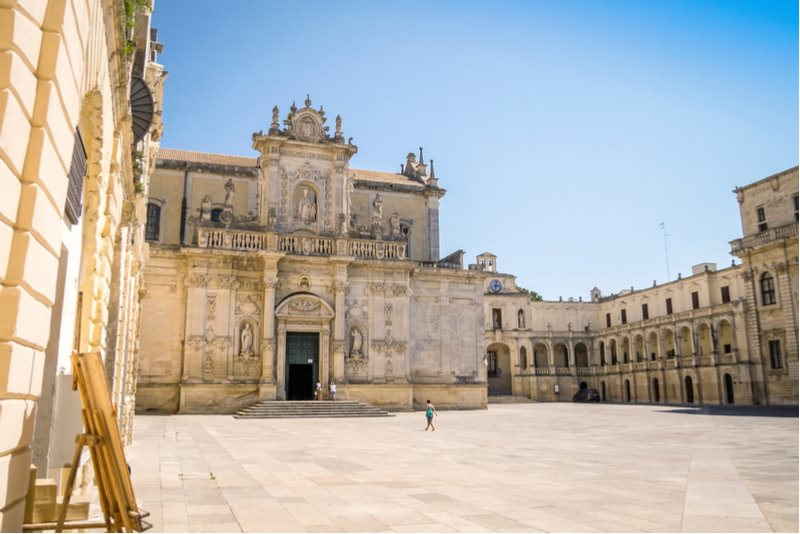 Dedicated to the Assumption of the Virgin Mary, Lecce Cathedral is located in the popular Piazza del Duomo and is the religious centre of the city. Dating back to the 12th century, the cathedral is a classic example of the Puglian Romanesque style with plenty of Baroque decoration.

In 1659 the cathedral was completely reconstructed, with the bell tower added in the second half of the 17th century. On our visit to the piazza we will also see the sublime facades of the Seminario and the Palazzo Vescovile. This piazza is one of the most beautiful and harmonious in the whole of Italy – definitely a Lecce must-see!

Although most of the churches in Lecce look Baroque, they actually date back to the Norman Swabian Age; they were built with a typical Puglian Romanesque structure and then subsequently had Baroque features added later on. The Church of San Matteo, along with the Church of Santa Chiara, are probably the only examples of churches in the pure Baroque style in Lecce, not only by their decoration but also the typical oval shape of the main structure. 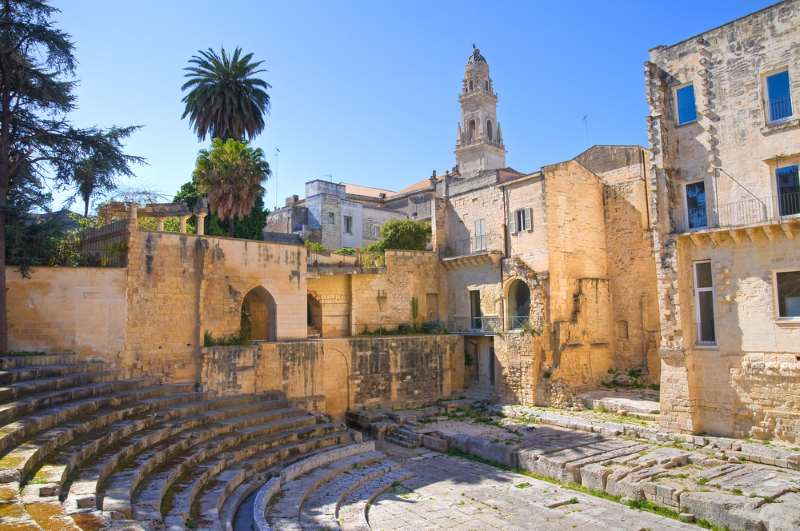 Be prepared to be impressed by Lecce’s Roman past with a visit to the Roman Amphitheatre. Still mostly buried underground, we will explore the one-third of this astonishing building that has been uncovered. Even just from this small section you will be able to imagine its original capacity of 25,000 spectators taking in displays of fights between gladiators and animals.

This piazza is the heart of the city and its many architectural styles are a testament to Lecce’s fascinating history. Besides the Roman Amphitheatre you will see the Palazzo del Sedile and a small church marked with the St. Marc lion, a clear Venetian influence. In the centre of the square is the old Roman column which used to belong to the city of Brindisi and is now topped with a statue of Lecce’s patron saint, Oronzo. 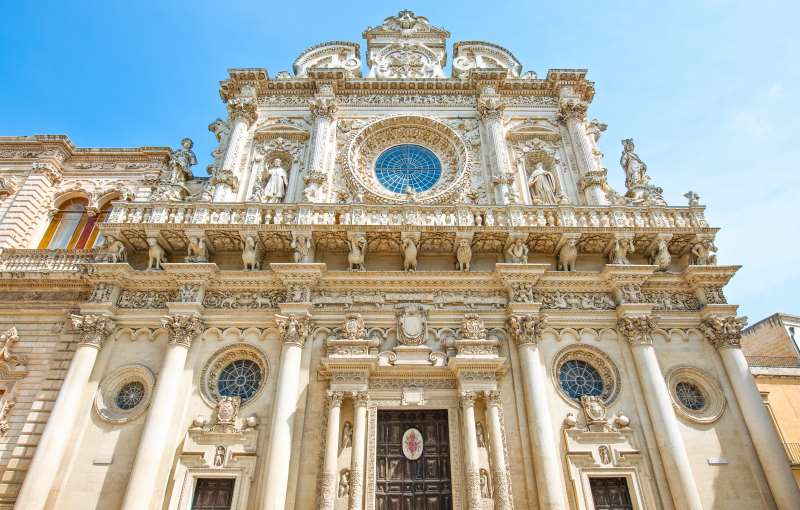 A superb example of Baroque architecture in Lecce, the Basilica of St. Croce is a delight to behold. One of its best features is the wonderful facade, which features a number of mythical and real creatures, such as cherubs, sheep and dodos. Another great feature is its five-floor belfry.

Because of the Ottoman incursions in the 16th century, Lecce was fortified with wide defensive walls and the old Swabian castle was reconstructed during the time of Charles V. As well as the fascinating Middle Age military architecture, you will also get to visit the paper mache exhibition inside the castle, a strong artistic tradition in Lecce.

If you’re in Lecce, you should definitely try the delicious Rustico, a pastry filled with tomato sauce, mozzarella and bechamel. It can be served cold or warm, as an appetizer or as a snack to go. Be sure to also not miss the typical Pasticciotto leccese, a sweet pastry filled with egg custard that locals usually eat while enjoying an espresso. There are other variants too, including chocolate, sour cherry or ricotta and pistachio. If you’re into coffee, you should also try caffe leccese, also known as caffe di mandorla in Ghiaccio, a refreshing coffee usually consumed in summer and made with a shot of espresso on ice and almond syrup. Don’t forget to sample the local wine primitivo or negroamaro. Puglia is also a great producer of rose wines which are delicious in summer.