Enjoy a cultural tour with us and
and discover the best
artistic heritage of Puglia!

Our cultural tour of Puglia is designed for people who have an avid interest in discovering the cultural side of the region. You will visit Puglia’s UNESCO World Heritage Sites, the must-see museums and archaeological areas, the hidden treasures of Galatina and the best examples of Puglian Romanesque- and Baroque-style architecture. This is a day-by-day itinerary focusing on Puglia culture.

This tour is offered to groups with a minimum of 4 participants and must be booked far in advance. If you're a couple or a solo traveler, you can check our small group tours.

We will advise you on accommodation based on the duration of your stay in Puglia. If you wish to take our cultural tour of Puglia in its entirety, we would recommend three different accommodation options in different areas of the region. 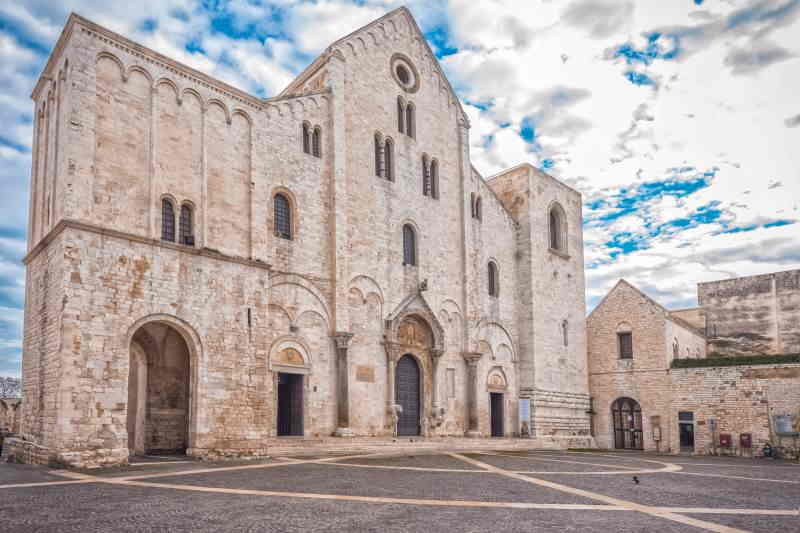 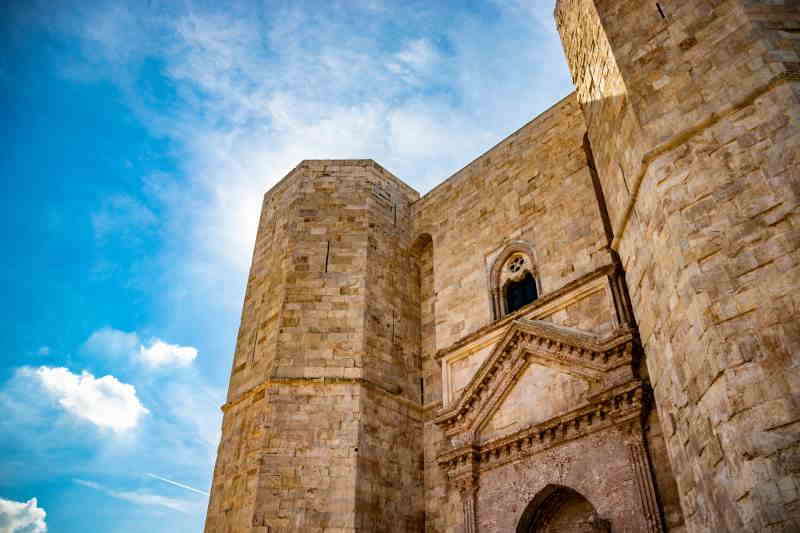 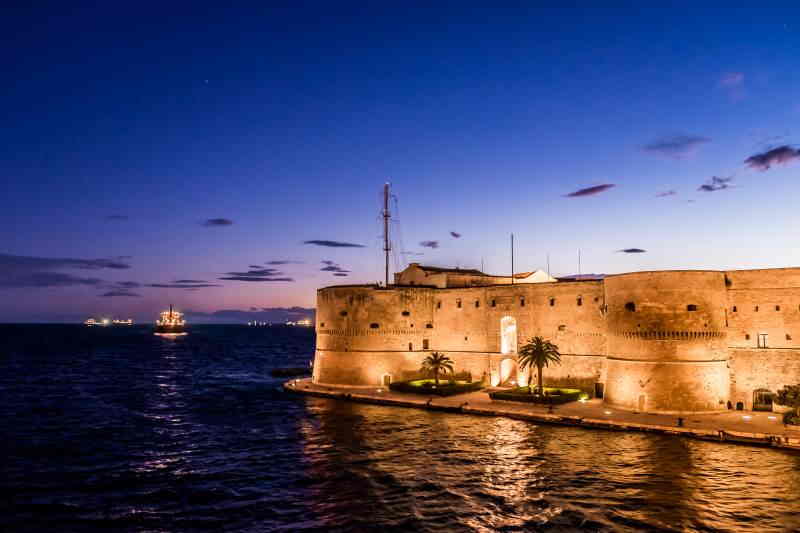 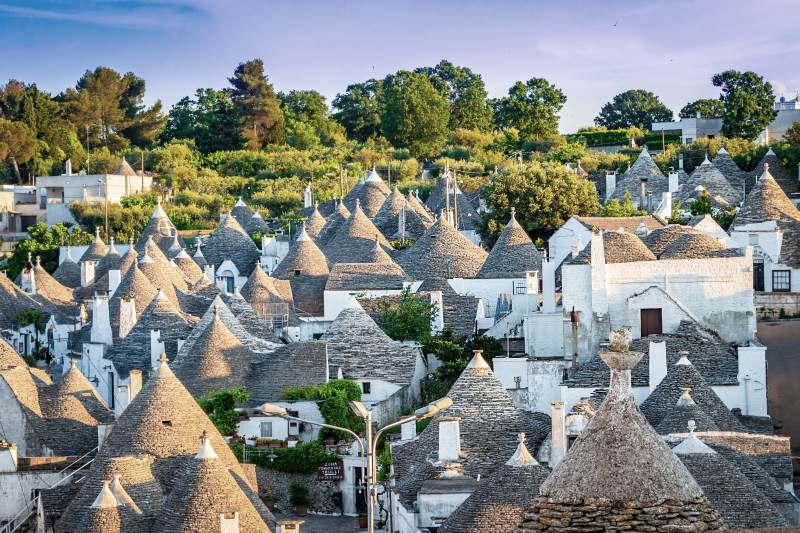 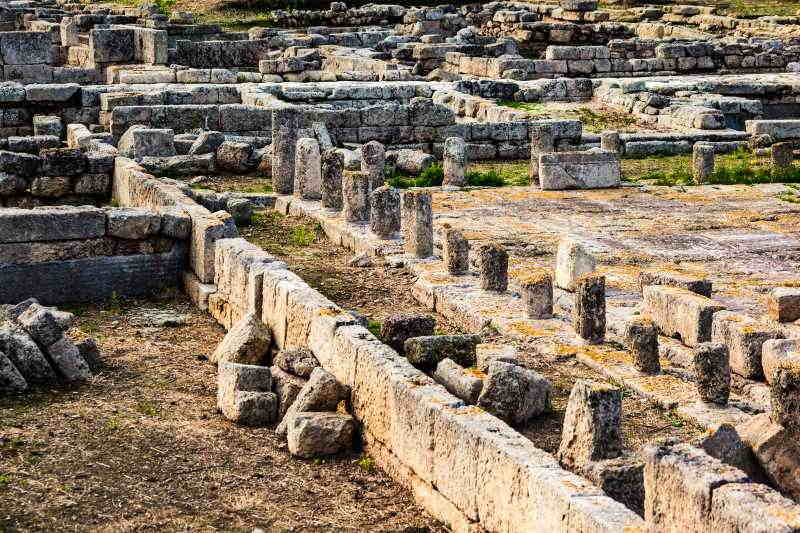 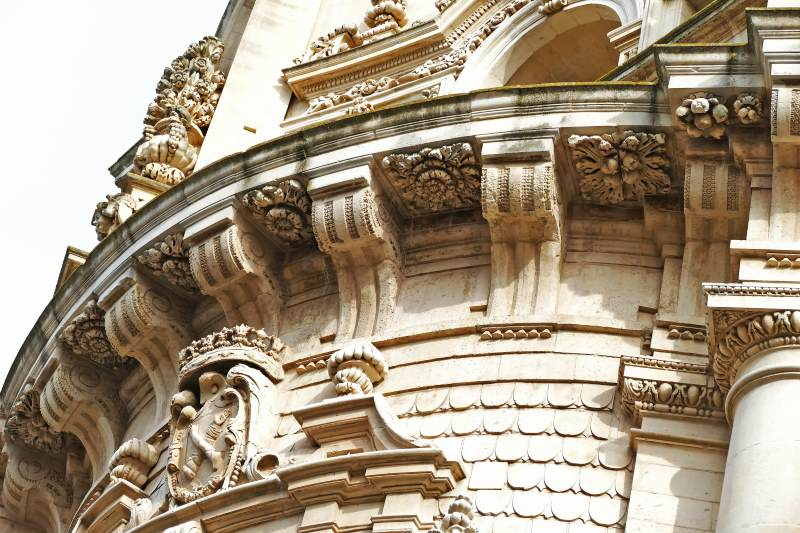 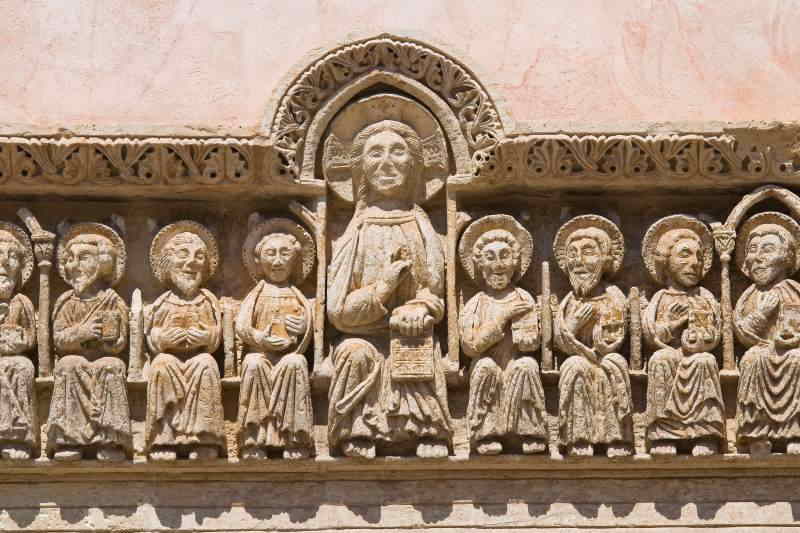 This is a sample itinerary for a private cultural tour of Puglia. We can adapt the itinerary to suit your personal interests, dates, days, preferences and requests. You can, for example, combine this tour with food and historical experiences or nature activities from one of our other tours.

On your arrival day, your personal driver will pick you up from Bari or Brindisi airport, at the harbour or from your previous hotel and drive you to your next accommodation in Puglia.

If you have fewer days at your disposal or you wish to make any changes, or if you’d like us to tailor a tour focusing on a specific area of Italian culture, such as an art history tour or Baroque art tour of Italy, we will adapt the itinerary to create your perfect Puglia trip.

Bari, the city of St. Nicholaus and Puglian Romanesque style

Bari is the capital of Puglian Romanesque architecture in the Puglia region, and on this first day of the tour you’ll discover the austerity and elegance of this architectural style. Here you will visit the beautiful St Nicolas Basilica, which is located in the historic centre of the city. The Basilica dates back to the Norman-Swabian age from the 11th to the 13th century, also known as the time of the Crusades. You will gaze in wonder at the majestic architecture of the church with its beautiful gold ceiling and also get to learn the history of Saint Nicolas and of the medieval district in the church’s surrounding area.

While in the capital of Puglia, you’ll also visit the St Sabino Cathedral, with its 17th-century crypt featuring the icon of the Madonna Odegitria enhanced with marble, and the modern Murat quarter with its Liberty-style palazzi dating back to the beginning of the 19th century.

Between Trani and Castel del Monte, Land of Frederick II from Swabia

The second day of your tour will begin with a visit to Trani, one of the most beautiful coastal towns on the Adriatic Sea. Here you’ll visit another masterpiece of Puglian Romanesque architecture, the cathedral of St Nicola Pellegrino, with its stunning bronze doors decorated with figures of religious importance, such as Jesus Christ, the Virgin Mary and the Apostles. This cathedral dates back to the Norman Age and is located in a unique position directly facing the sea. In Trani you’ll also discover the medieval Jewish quarter and traces of the Temple Knights that used the port of Trani to reach the Holy Land.

After Trani we will visit one of the two UNESCO World Heritage Sites in Puglia, Castel del Monte. This amazing castle was built during the 1240s during the time of Frederik II from Swabia. Recognisable from the Italian version of the one Euro cent coin, Castel del Monte has been described as the ‘most fascinating castle built by Frederik II’ and has a unique geometric design in the shape of an octagonal prism, with an octagonal tower at each corner.

Visit of a rupestrian church and cave house

Designated as the European Capital of Culture 2019, Matera is one of the oldest cities in the world. Matera is particularly notable for its sassi, cave dwellings dug into the limestone rock. These buildings add to Matera’s unusual landscape; possibly the reason why it has been used as a location for many movies, including The Passion of the Christ, Quantum of Solace, Wonder Woman and Ben Hur. On this day of your private tour, you’ll have the chance to explore these completely unique buildings, which date back to at least 7,000 BC and visit a typical cave house. We will also visit a Rupestrian-style church with impressive Byzantine frescoes.

Visit of the MARTA Museum

Founded in 706 BC by Spartan colonists, the ancient Greek city of Taras – now known as Taranto – is the most fascinating and interesting historic site of Puglia. On your guided tour, you’ll see the famous National Archaeological Museum MARTA which will give you a deep insight into the Greek and Roman history of the region. The museum has over 200,000 artefacts dating from Prehistoric times to the Middle Ages, but it’s their incredible collection of ‘Ori di Taranto’, stunning Hellenic-era gold artwork and jewellery, that the museum is famous for.

On this day you’ll also see the Aragonese Castle, one of the finest sights in the city. Although the majority of this castle was constructed in the late 1400s, some parts do actually date back to the 900s when the Byzantines ruled the area. As well as the castle, the magnificent Chapel of St Leonard is located within the castle walls and also a must-see.

You’ll also get the chance to see parts of an old Greek temple and the old historic centre of Taranto which is home to the Cathedral of St Cataldo, the gem of the city.

Guided walking tour of Alberobello and visit of Trulli UNESCO

Guided tour of Polignano and Ostuni

The fifth day of your private tour is centred around the bucolic Itria Valley, a fascinating part of the Puglian countryside dotted with trulli, traditional conical roofed houses. The town of Alberobello is known as the capital of the trulli and has special status as a UNESCO World Heritage Site because of the over 1,500 examples of trulli it is home to. Here you’ll be able to wander around these beautiful, whitewashed structures as well as having the chance to visit the trulli museum.

Polignano a Mare is one of southern Italy’s hidden gems. A beautiful town set into a gorge with a number of caves, whilst here you’ll be able to explore its wonderfully preserved historic old town and enjoy the spectacular views over the pristine Adriatic Sea.

Finally, we’ll head to Ostuni, the gleaming white town with olive trees as far as the eye can sea, stretching out towards the Adriatic. This fascinating town is like a labyrinth, its narrow alleyways and stairwells twisting and turning, the perfect place to stroll around and get lost. It’s also an extremely vibrant town, with a number of cafés, restaurants and boutiques to enjoy.

Next we’ll head to the close town of Monopoli, an old picturesque fishing village with a number of beautiful sights. On this tour you’ll visit the cathedral with its multicoloured marble, the castle of Carlo V, the majestic Palmieri Palace built in late Baroque style, and then get the chance to stroll along Monopoli’s perfect beaches.

The seventh day will see us discovering the Salento Peninsula, in particular the capital of the Baroque style, Lecce. Dubbed the ‘Florence of the South’, the enchanting historic centre has a vast array of sights that we will visit. These include the Duomo, the St Croce Basilica, the Roman theatre and amphitheatre, the Porta Napoli (also known as the Arch of Triumph) and the city walls.

After Lecce we’ll head to Otranto to see the beautiful Romanesque cathedral with its stunning 12th-century mosaic floor which depicts both stories from the Bible, such as Noah’s Ark, and figures of historical, mythical and even pagan importance, including Alexander the Great and King Arthur. We’ll also have the chance to visit the small museum attached to the cathedral, which contains artefacts from the cathedral site, including pieces from an earlier mosaic dating back to the 4th or 5th century.

Hidden treasures of Galatina and Gallipoli

On the final day of your private tour, we’ll start off the day by visiting the church of St Catherina d’Alessandria in Galatina, one of the most spectacular churches in Puglia with a number of Gothic elements (a rare example in the Salento area) and incredible frescoes from the 15th century depicting scenes from the Old and New Testaments, several Saints and scenes from the Apocalypse.

Afterwards, we’ll discover Gallipoli, where we’ll visit the 13th-century Angevine-Aragonese Castle, the 14th-century city walls and many churches. The Baroque cathedral of St Agata will definitely be a highlight of your time in Gallipoli, with its fantastically decorated facade with a number of niches holding different statues of saints. We’ll also visit the Greek fountain which features bas-reliefs of mythological features. 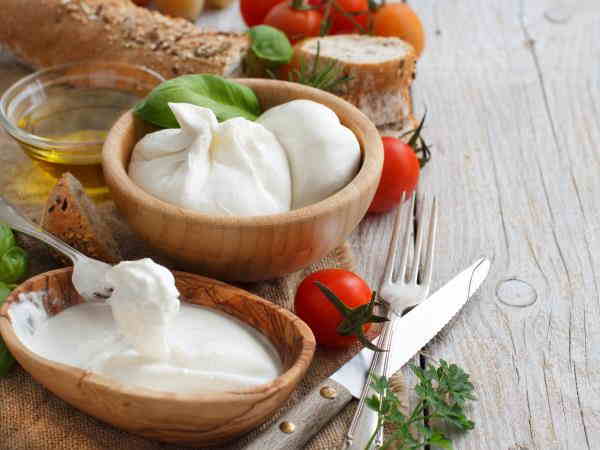 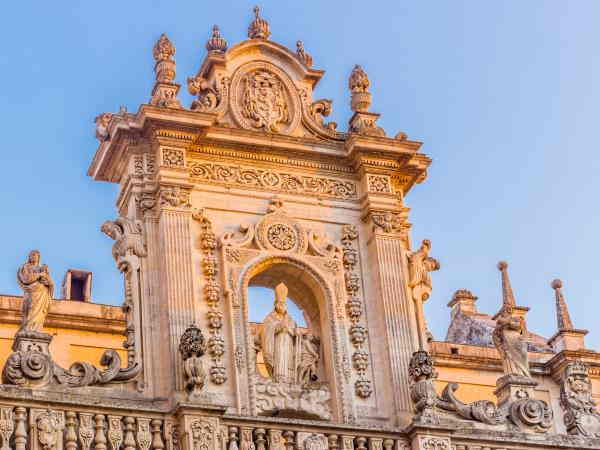 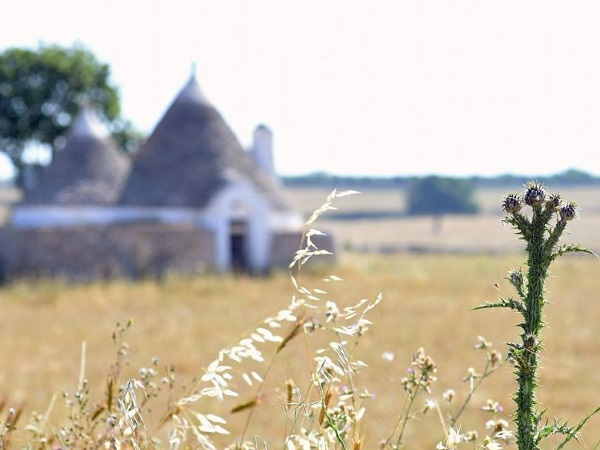